Today, agriculture sector requires an approach that can bring sustainable changes in the practices of sowing, growing and harvesting crops. Crops grown through modern scientific intervention like biotechnology is one of the solutions to grow food sustainably. Using biotechnology is one of the ways which can contribute to sustainable agriculture practices through conserving natural resources, including biodiversity.

The GM crops have been grown for 25 years and have had a positive impact on biodiversity through increasing yield and productivity. Higher yields per acre of land have reduced the need to convert forests into farmland, thereby conserving biodiversity.GM crops cultivars also facilitates the adoption of conservation tillage which further ensures sustainability. Scientific reviews of GM crops by several researchers and scientists also confirmed that they have no negative impact on the environment, flora, fauna or humans. According to a recent report based on an assessment by the U.S. National Research Council GM crops are less damaging to the environment than the non-GM counterparts. Rather, GM crops help in decreasing pressure on biodiversity while helping in feeding the rapidly increasing population for the next thirty to forty years. 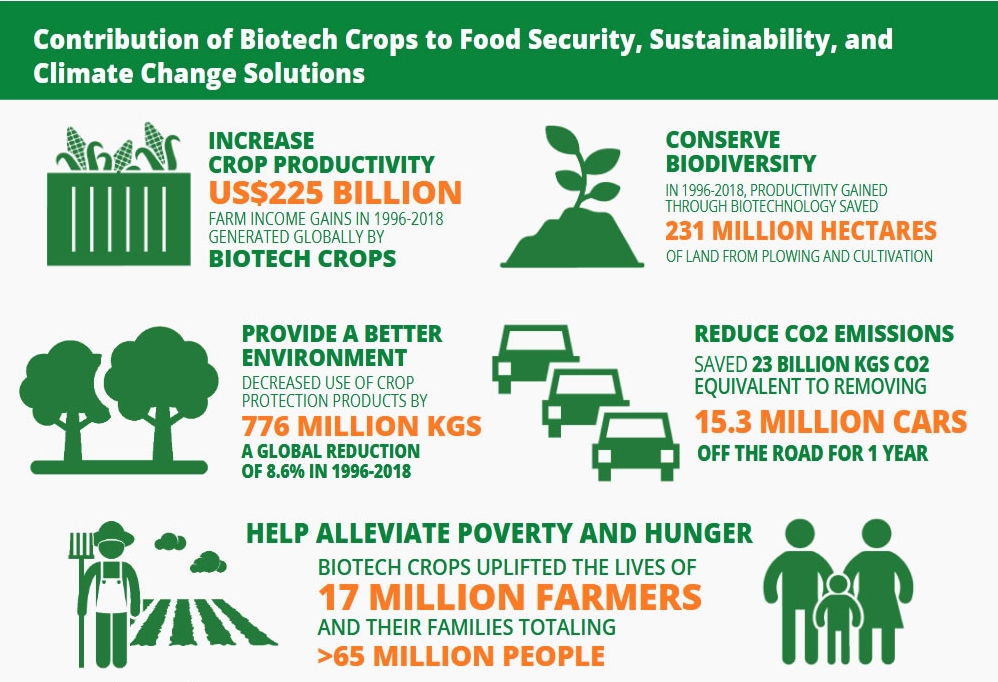 Biotechnology (GM crops and gene editing) is being adopted on a world-class level to support and strengthen the food value chain and enhance biodiversity. The new technology, gene editing, for which Noble Prize was awarded in Chemistry has shown immense success. Besides a few commercialization, several pipeline innovations using gene-editing indicates that it has the capacity to not only alleviate the impacts of agriculture on biodiversity but also actively help conserve dwindling species and ecosystems.

For instance, research is ongoing for crops like rice and wheat to introduce insect-resistant and herbicide tolerant varieties. Similarly, gene editing practices involving technologies to improve drought tolerance and salinity in crop plants would help in alleviating the pressure to convert high biodiversity areas into agriculture use. Instead, it will enable crop production on suboptimal soils. Low soil moisture will be tackled through drought-tolerant crops that will withstand this condition. Drought tolerance technology will have an optimal use in areas like sub-Saharan Africa, which are most impacted by drought occurrences and have minimal access to irrigation.

Gene edited varieties with highnitrogen use efficiencycan reduce or minimize the use of fertilizers and reduce the nitrogen run-off without affecting the yield production. This technology is anticipated to release in coming future.

Looking at all the plausible scenarios, gene editing crops should receive their fair share of acknowledgment and recognition across nations globally. It is high time that the farmers including smallholder farmers and commercial growers as well as the general public start gaining appropriate information and knowledge about the sustainable benefits that GM and gene editedcrops can bring. It can be possible only when scientists and researchers along with the Government raise awareness about such crop improvement techniques that can have direct impact on biodiversity and has the potential to save it from the impact of intense industrial scale agriculture.